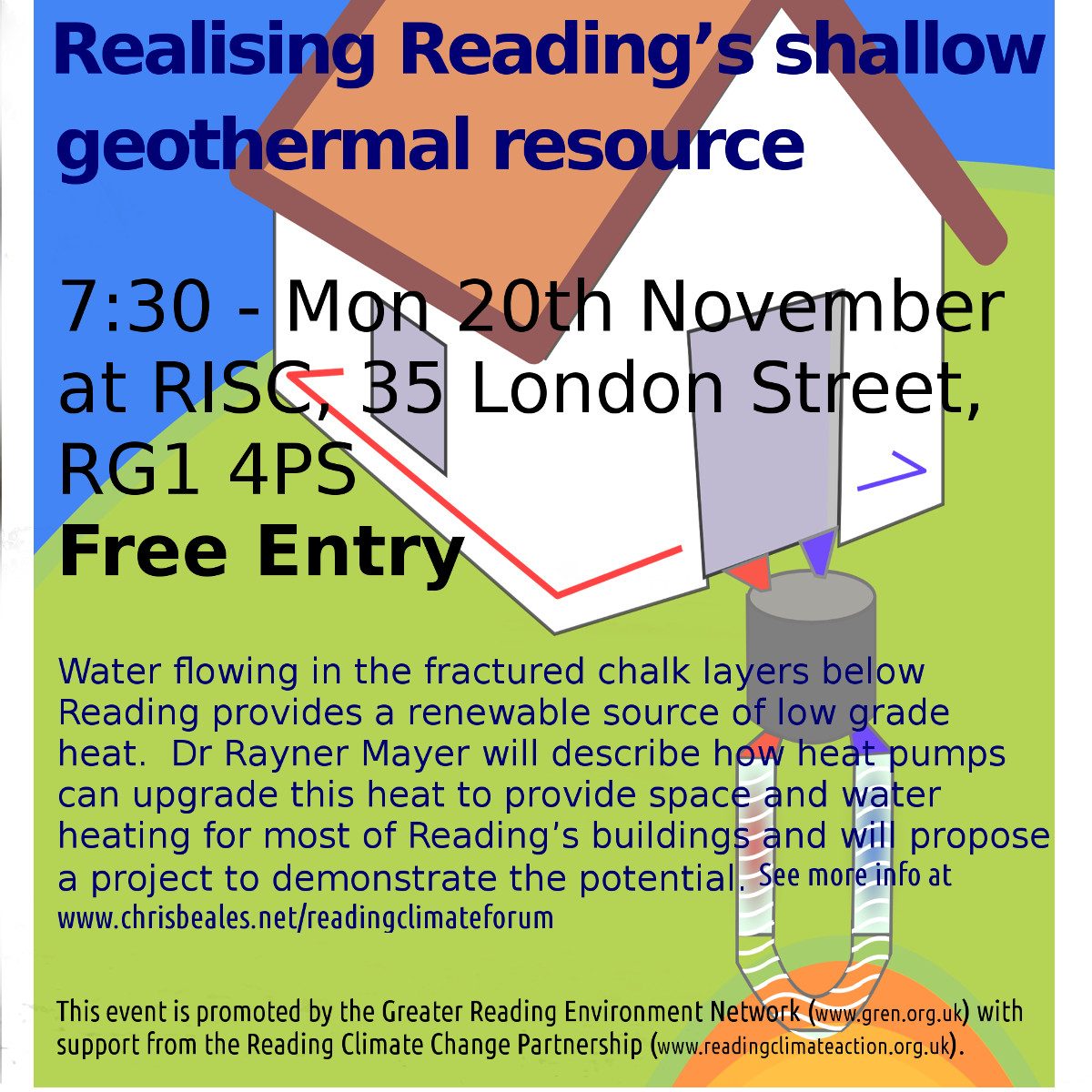 This ‘Reading Climate Forum’ event was held at on  20 November 2017, in the conference hall at RISC – 35 London Street, Reading.

Rayner Mayer (Sciotech) – explained the need for ground source heat pumps in Reading, and the opportunity we have to take advantage of the chalk that underlies the town.

Chris Beales (Environment Agency) – talked about how groundwater is used, and some of the challenges faced in London by users of a different version of the technology.

Darren Wilkinson (Vexo International) – explained the technical solutions for making existing domestic heating systems a lot more efficient…which is very important for a scheme like the one being proposed.

Stuart Gadsden (Kensa Contracting) – explained how the closed-loop systems work in practice, and gave us examples of successful schemes for housing associations.

We finished with a discussion about a pilot project, to test the technology in Reading. This has the support of the Reading Climate Change Partnership, and we are looking forward to seeing the results. 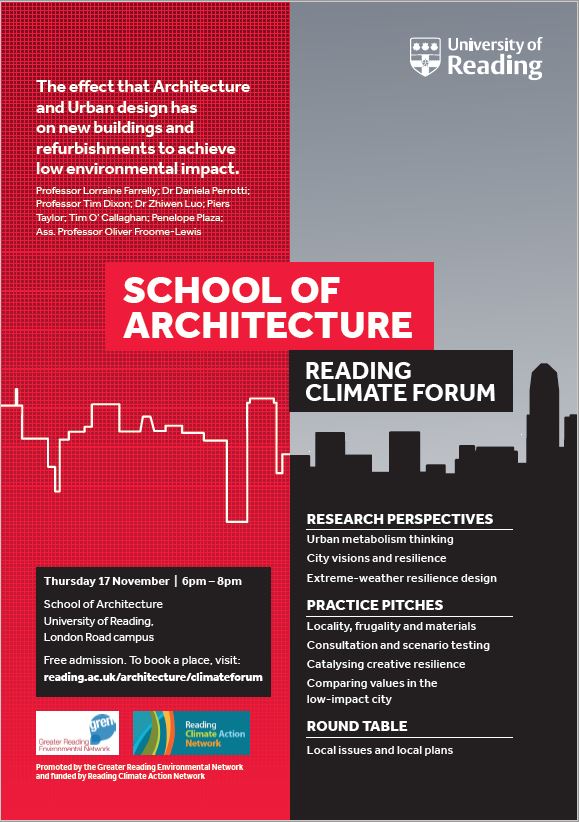 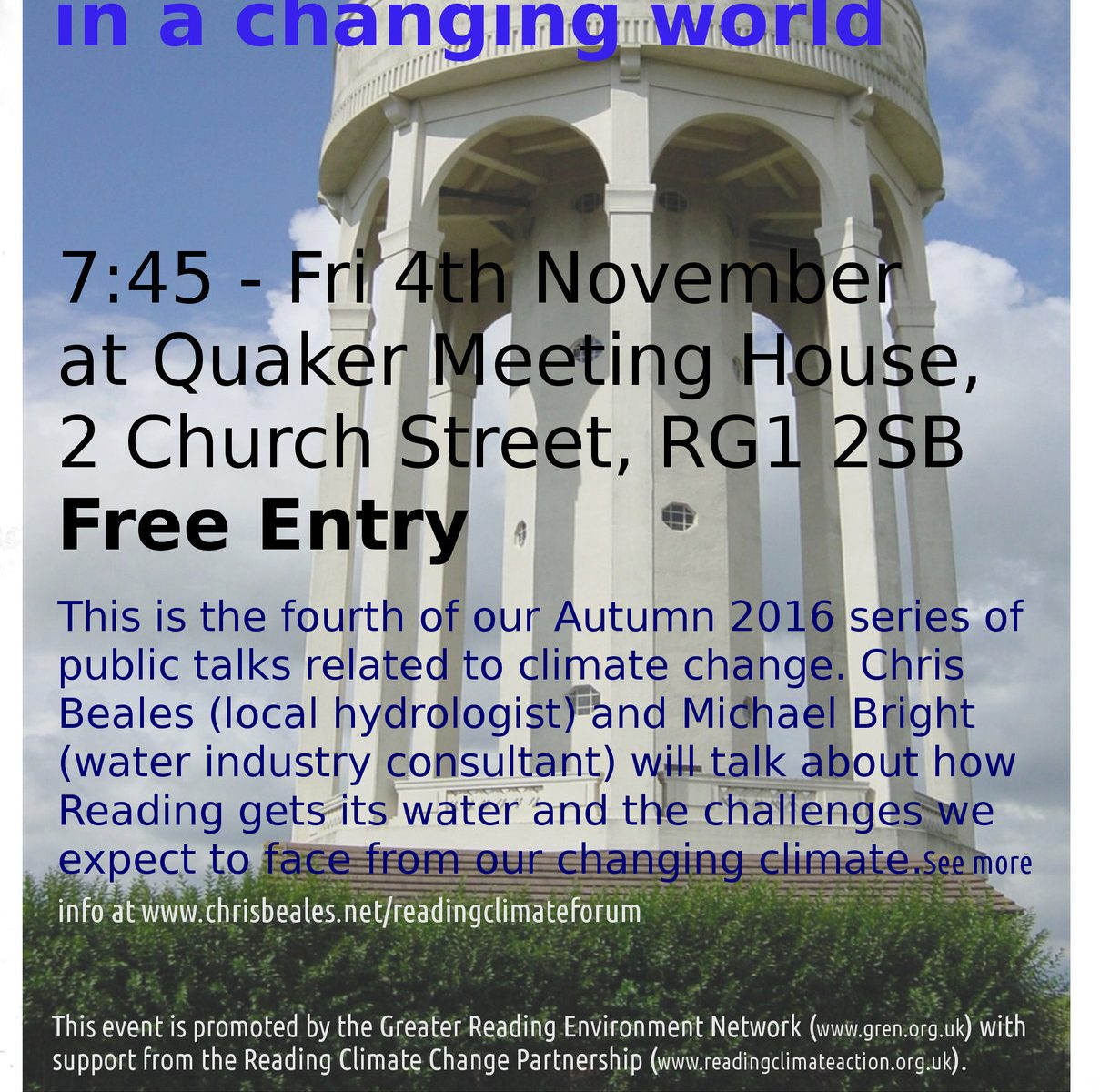 “We live in a water stressed area. Learn about the impact of climate change on our water supplies with wetter winters and drier summers, where our drinking water comes from and what we can do to be more efficient in our water use.”

Chris Beales is a hydrologist working for the Environment Agency. He will talk about the current pressures on our local river system, and how change change is predicted to affect our rivers in the future.

Michael Bright is a water industry consultant. He will talk about how Thames Water supply water to our homes in Reading. He will discuss some of the challenges and what we can do as individuals to reduce pressure on our water resources.

We look forward to welcoming you to this, the fourth of our Autumn series of talks. It will be a lively and interesting discussion. 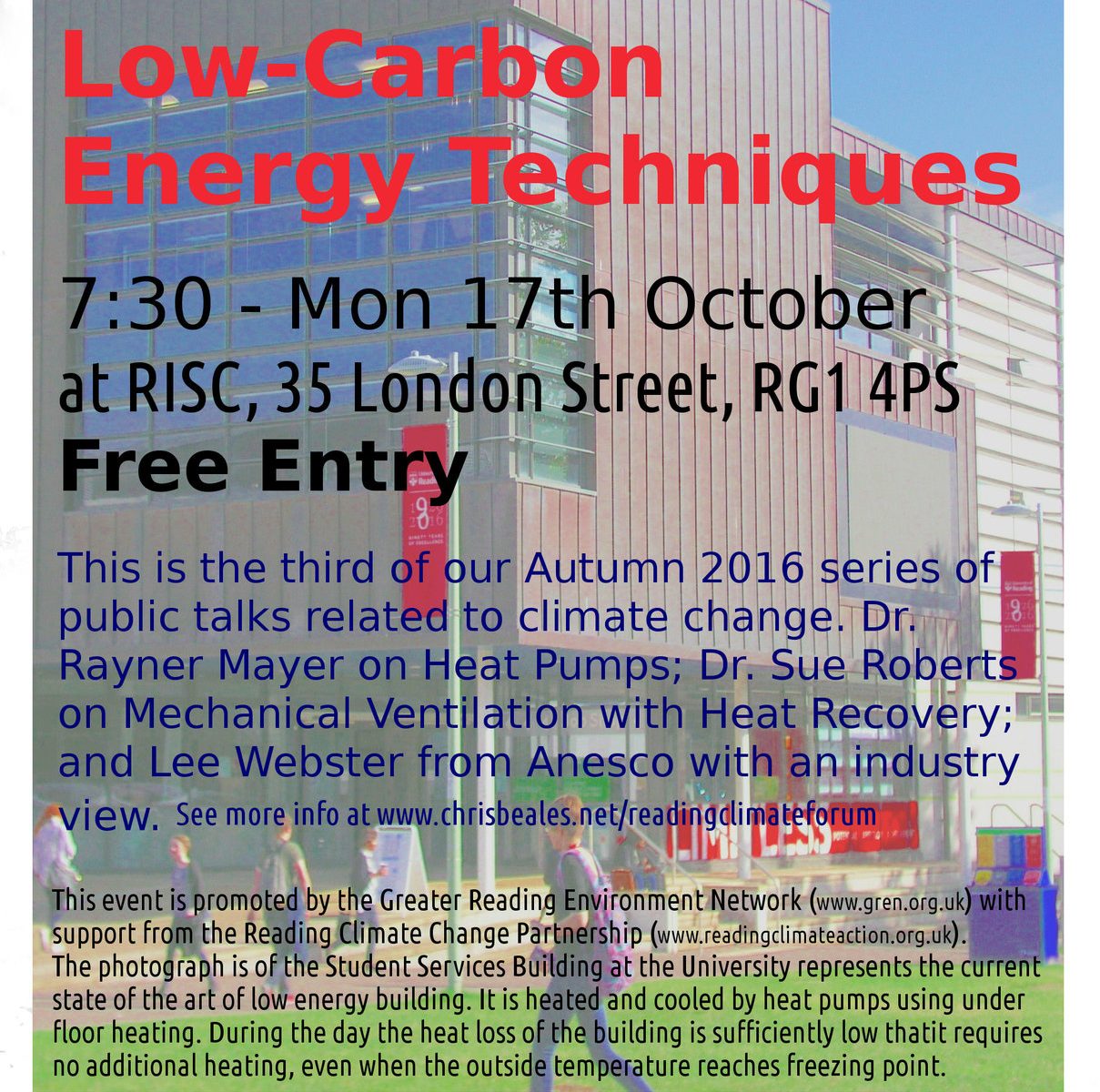 This is the third of our Autumn 2016 series of public talks related to climate change. Around a fifth of the UK’s carbon emissions come from domestic heating so reducing heat loss from homes and using energy efficient techniques will play an important part in meeting our climate change targets and keeping running costs down. Three speakers will provide an overview of the options and will describe some of the different techniques in detail.

Well-insulated and draught-proofed homes need to be properly ventilated so MVHR – Mechanical Ventilation with Heat Recovery – is important to ensure comfort and prevent condensation while minimising heat loss. Dr. Sue Roberts of energy assessors Ecomorph will describe how this works drawing on her experience turning her home into a ‘Superhome’.

Dr. Rayner Mayer of Sciotech Projects Ltd will explain how ‘heat pumps’ can multiply the energy in ‘green’ electricity to replace gas boilers as the UK abandons the use of fossil fuels. One example is the Student Services Building at Reading University which represents the current state of the art of low energy building and is heated and cooled by heat pumps using under floor heating. Heat pumps are widely used in air conditioning but studies suggest that Reading’s geology is particularly well-suited to exploiting heat held in the ground. 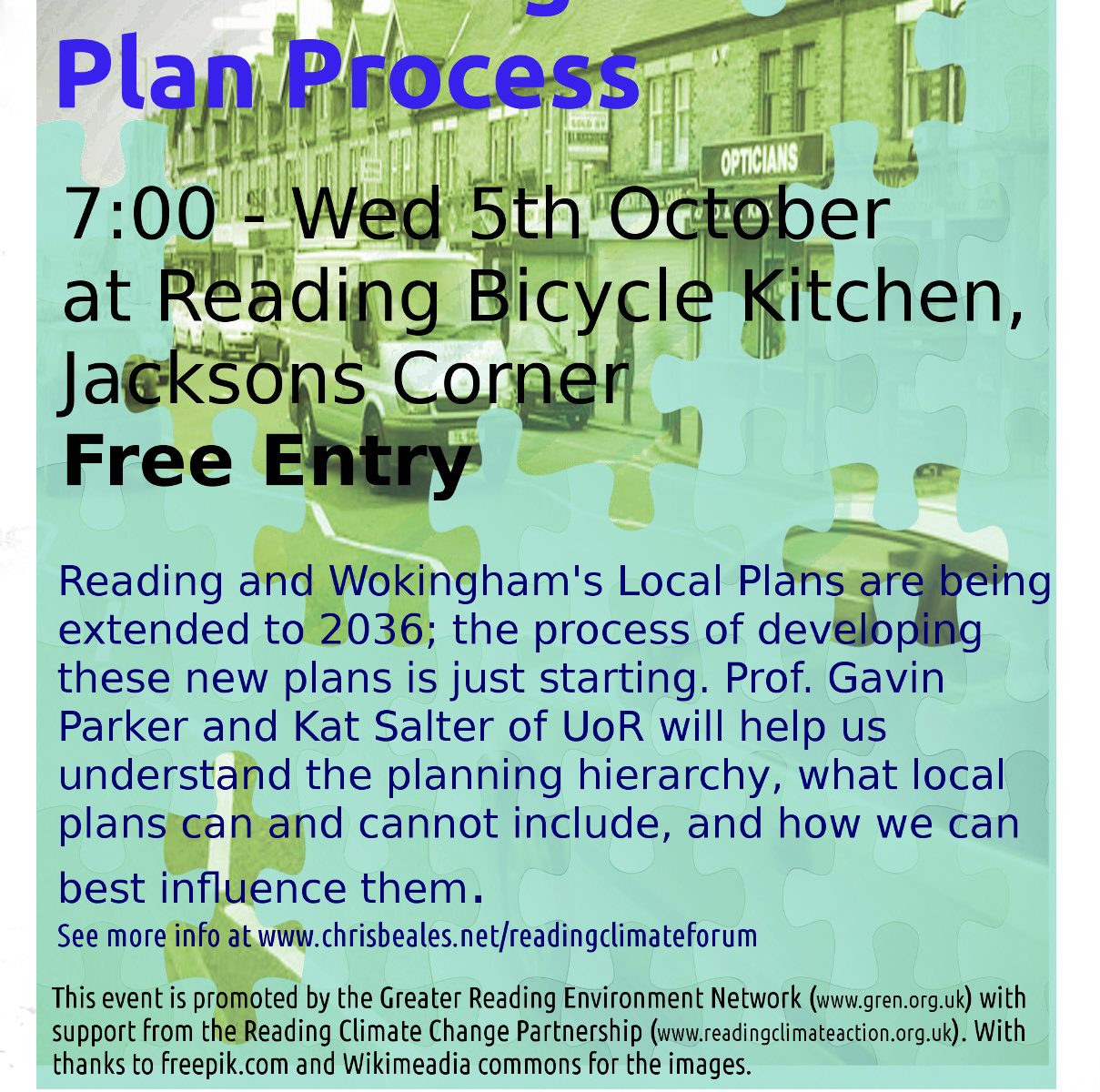 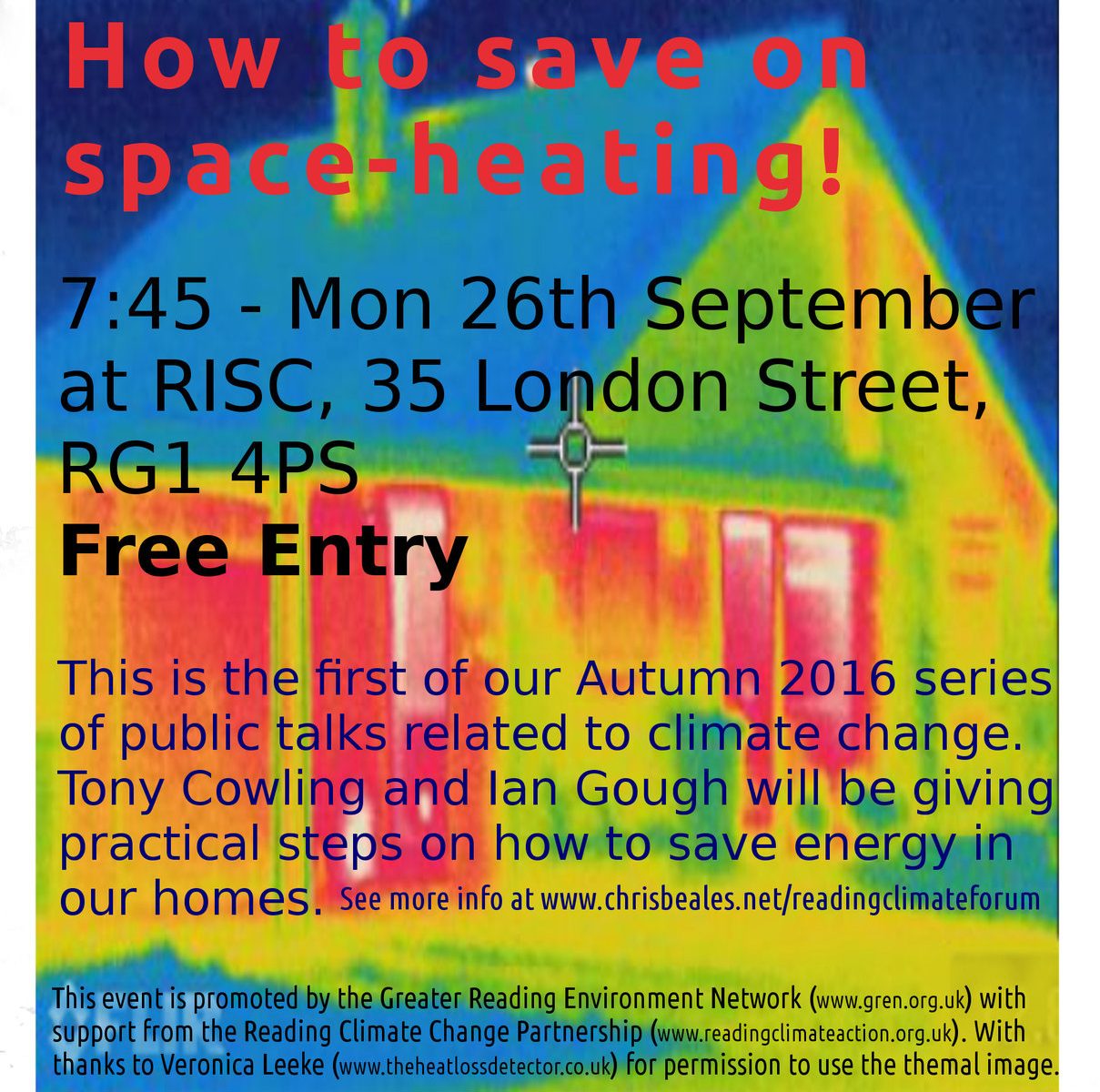 This is the first of our Autumn 2016 series of public talks related to climate change.
Tony Cowling and Ian Gough will be giving practical steps on how to save energy in our homes.

They will be giving practical advice on retro-fitting domestic energy-saving measures, including:

Find out what’s right for you – from draught-stripping to aiming for PassivHaus standard – and how to save money, energy and carbon. 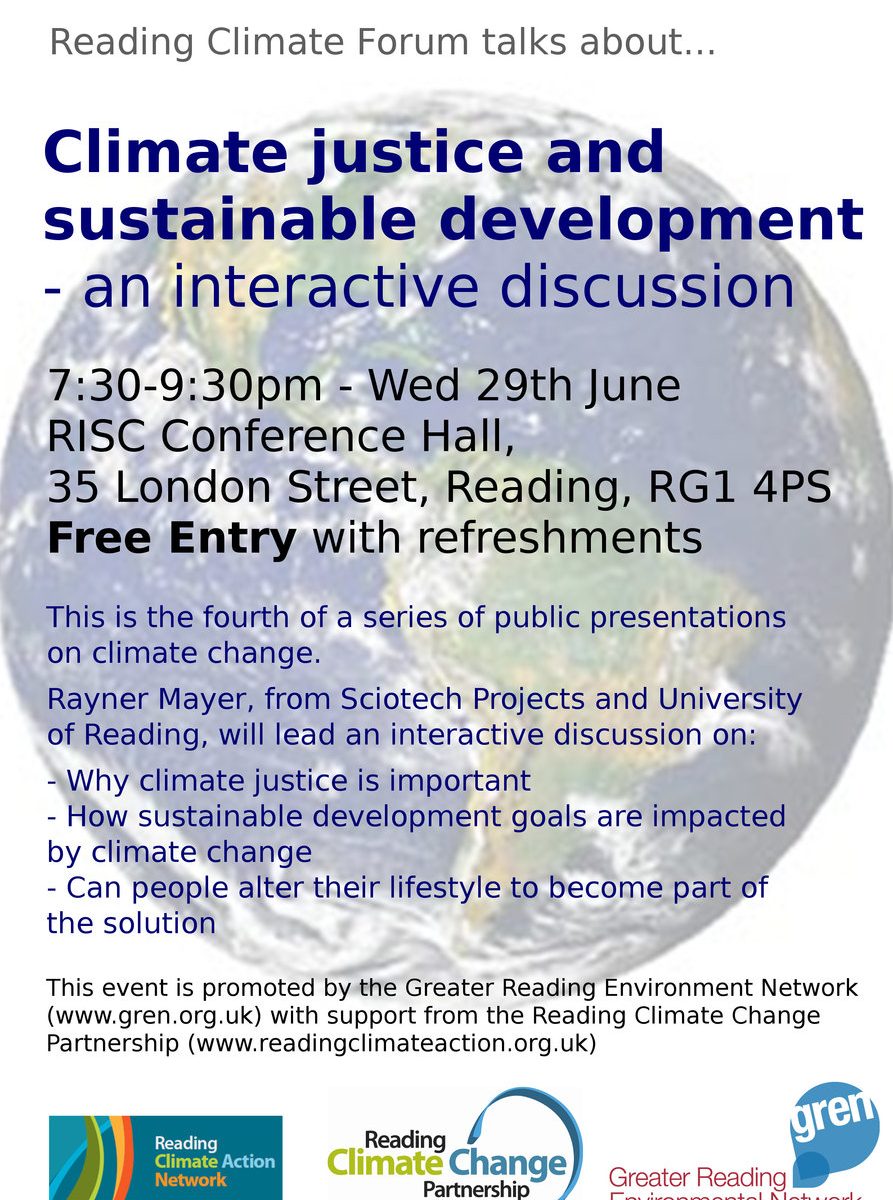 Dr Rayner Mayer (from Sciotech Projects and University of Reading) hosted a lively discussion on the ethics related to climate change. He introduced the following 3 topics, after which the audience debated the issues.

In the first section, Rayner introduced the concept of Climate Justice. He reminded the audience of the increase in extreme weather events, such as floods and droughts, associated with increasing climate change. These threaten lives and livelihoods across the world. He concluded that some regions are more affected than others; and that developing countries are disproportionately responsible for the greenhouse gas emissions that cause climate change, whereas poorer peoples are more vulnerable to the consequences.

In the next section, Rayner discussed Sustainable Development. In simple terms: it is an obligation for the present generation to leave the world (biosphere) in a fit state for future generations. He noted that we have had successes so far, with millions of lives being saved as a result of the 8 ‘Millennium Development Goals’ (2000-2015). In the next 15 years we have the international ‘Sustainable Development Goals’ including: to end poverty, to end hunger, to reduce inequality and to ensure sustainable use of eco-systems. These include tackling climate change – if we don’t tackle the UN estimates that there could be up to 100 million climate refugees by the end of the next decade.

Finally Rayner talked about December 2015’s Paris Accord. In this, 195 individual nations have submitted ‘Declared National Contributions’, which are emissions reduction promises. These will be reviewed every 5 years. All countries signed-up to trying to prevent global temperatures from rising by more than 2 degrees Centigrade, however the current declared contributions could result in a 2.7 degrees temperature rise which is higher than that agreed in Paris. Religious leaders, including the Pope, are making strong calls for us to act on this global threat to life on earth. It is important that there are ‘top-down’ agreements like the Paris Accord, however it is equally important that we look at our own lifestyles and what are we going to do about it.

For more detail and links to further information please see: the full notes from our discussion (pdf)

And you can also view Rayner’s slides here (pptx)